Starting with model aircrafts can be quite hard. Let me say though that flying model aircrafts is extremely rewarding and addicting. It just feels amazing flying all over the place, kinda brings out your inner pilot. And if you are like me that can’t fly real planes then hey it’s the second best thing.

Nowadays more and more people call quadcopters drones. This is mostly due to the recent media attention. UAV (unmanned aerial vehicle) is a vehicle that can go from point A to point B by itself. It uses a GPS tracking system to do that. The middle and higher end drones are actually capable of doing that with the on board GPS.

For years you have had to choose between 2 types of aircraft: airplane or a helicopter. Airplanes are a lot of fun to fly with. You can do all kind of stunts and even races. They are also the hardest to fly with. The downside though is that they require a lot of free space to take off and land. This limits flying them. Helicopters on the other hand can take off from anywhere. Getting used to flying them also takes a lot of time. The thing is though that they are really expensive and the cheaper versions aren’t as good. They have problems flying with wind and their parts are expensive.

As you know the popularity of aerial photography has increased tremendously. That is one of the reasons why we now have this weird looking thing called a Quadcopter. Quadcopter got its name for having 4 arms with motors and propellers. This design provides increased stability and power. What also makes quadcopters so great is the simplicity. They simply consist of a frame, motors, propellers, receiver, flight controller and a speed control. Even their design is simple. All this makes them a lot easier and cheaper to repair.

Flying a quadcopter is quite simple, it just takes times to get used to. The controller has 2 joysticks. The left joystick controls the throttle and the yaw. Pushing the stick up will increase the power. Left or right will make the drone rotate around its axis left or right. The right joystick controls the pitch of the craft. That means that pushing the stick will make the drone tilt accordingly. 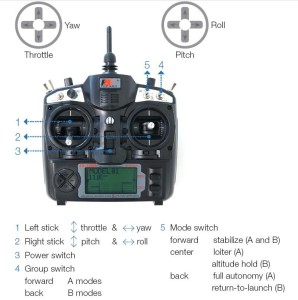 Some drones are different though. For example AR.Parrot 2.0 is controlled with a smartphone or a tablet.

As you have probably seen, there are tons of different models for sale today. Starting with low cost drones like the Syma X1 at $40 including a radio transmitter. It’s an excellent drone to start with. You get more than enough for the price. Yes it can’t lift a camera but for learning how to fly – you can’t go wrong. Also hey it’s better to crash a $40 drone at first than a $500 one.

You can read about our review of the Syma X1 here.

The first thing you should know before buying a drone is that not all drones are easy to fly. Some require a lot of configuring before you can take off. So be prepared to practice.

Secondly figure out what is it that you exactly want. Most importantly do you want a drone with a camera or use an external one? Or maybe you want it for racing, then you might be better off building one instead!

Thirdly decide how much you are willing to spend. Based on that you can then compromise and find the best drone for your price. The typical mid-range quadcopter starts at around $300-500 such as the DJI Phantom 2, Walkera QR X350. These can be used to lift lighter action cameras such as GoPro. Moving up to $700 – $1000 price range you get to the more serious models that are made for professional video shooting. 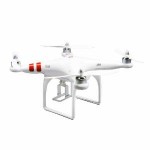 The simplest drone for people who know exactly what they want to do from the start. It’s a good investment if you know you are going to start shooting aerial videos. It’s powerful enough to fly with an action camera such as a GoPro. It also has a high flying range, GPS functionality and it’s pretty much a out of the box and start using product. That makes it an excellent product even for a beginner.

Definitely the most capable ready to fly drone in that price range. IRIS+ has features such as flying autonomously by a pre-drawn path. You even have the option of displaying live telemetery feed onto a tablet. It also comes with a universal RC radio which allows you to configure pretty much everything. Just like the DJI Phantom 2, it can carry a smaller camera for aerial photography. However it has cheaper batteries than the DJI series.

You can read more about the IRIS+ here: IRIS+ Review

Before buying a drone you should do some research regarding laws. Different countries have different regulations when it comes to aerial laws. For example the Federal Aviation Administration (FAA) in USA says you can’t take your drone over 400ft in air. If you are looking to try make money with the drones then pay in mind that the FAA prohibits the use of UAV for commercial work. In other countries the rules are again different and should be researched. Pay all that in mind, you don’t want to get into trouble.

Quadcopters are amazing vehicles that are somewhere in between airplanes and helicopters. Their technology and capabilities are evolving day by day. Besides just plain flying the drones are also getting more acrobatic making flying more fun. A quadcopter is a right choice if you are looking for a good and simple aerial vehicle.

You can read more about different drones on our review page or just google!