GoPro is currently the most sold action camera out there. Its simplicity, lightness, quality and amount of options has won people over. Mounting however is something that hasn’t been talked about much and in my opinion it’s the most important aspect of the camera.

Firstly we will talk about drone mounts. These are simple mounts that work with a majority of quadcopters. The one thing they all have in common is that they are light. That is the key here.

Adhesive mount is the most popular and dumb proof option. It should fit onto any drone unless stated otherwise. Besides that it comes with the GoPro so you don’t have to spend any extra money. If you have used it however and need a new one then it costs around $30. Remember to go with the flat and not the curved one.

A mount created specifically for the DJI Phantom 2. This has already got an anti vibration system. It can be connected to the DJI flight control system. It can stabilise and control the camera at even the highest speed. The reason it’s called 2D is because of the 2-AXIS movement. This system costs around $300 to $400.

Basically the same as the H3-2D version but this one has a 3-AXIS movement. This system is also made for the DJI Phantom 2 and costs $379.

I would definitely recommend the 3D Gimbal over the 2D one. They cost the same and at some stores the H3-2D is even more expensive which makes no sense really.

If you haven’t bought a DJI Phantom 2 yet and are looking forward to doing so then I would recommend buying a model that comes with the mount. There is the Phantom 2 + H3-3D combo that is cheaper than buying them separately. Sadly there hasn’t been a static mount made yet so if the Zenmuse is too expensive for you then you can use the adhesive GoPro mount. As an alternative you can also buy the Phantom 1 mount and then drill new holes into the mounts plastic part. This way you can make it fit the Phantom 2.

First of all the adhesive mount I mentioned under drones can also work in other situations. That is why I consider it the most versatile mount available. However GoPro has created mounts for also specific situations and needs.

These are created to attach to surfboards. They include 2 Surfboard Mounts and 2 Adhesive Anchors to keep it extra secure. This set costs $14, so nothing expensive. Attaching it is easy with the adhesive glue under the mount. You can remove the GoPro camera by the frame which and leave the mount still attached to the surfboard. PS. Make sure you use a waterproof cover!

Like the previous this is also a special adhesive mount with an arm extension. The extending arm gives the possibility to move the camera to shoot from different angles. It’s attached to a helmet by the adhesive part. This type of mount is mostly used in extreme sports. It costs $10.

Wish to have complete control of what you capture while being on the move? Then Wrist Housing is the answer. It basically gives you the possibility to wear the camera as a watch. This is extremely useful during extreme sports or constant moving where holding the camera is impossible and dangerous. You just attach the GoPro to a Velcro strap and wrap it around the wrist. It costs $36.

This mount is to help you shoot videos in POV. It eliminates shaking and looks more professional than just holding the camera. The negative part is that this requires the GoPro to have a LCD back. That’s to balance the camera properly. It costs around $150.

GorillaPod is basically the regular bullhead tripod that comes with a GoPro mounting clip. The tripod can be used for anything. For example you can wrap it around a tree branch and pole or just put it on a desk and use as a normal tripod. The GorillaPod costs $40. 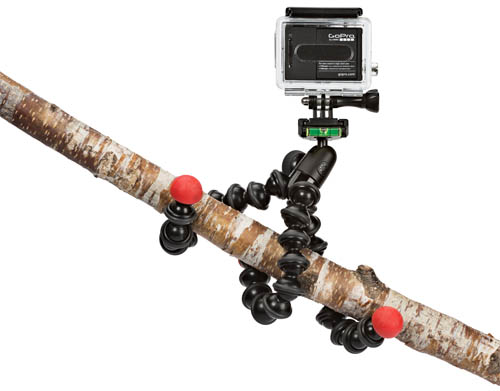 The handlebar mount is really high quality and made out of CNC machined aluminium. It weighs 46 grams and the design is really simple. It helps you mount the GoPro directly to a bike’s handle bar. The mount consists of two aluminium pieces that are secured together by Allen key bolts. You can buy it for $50 and it also comes with a Lifetime Warranty.