The drone measures about 114 mm diagonally. The build quality is quite good and it feels solid in hand. The cover of the drone and propellers are made out of light quality plastic.

Hubsan X4 comes with a 3.7V 380mAh Li-Po battery. It provides around 7 minutes of flight time and it takes 30 minutes to charge it. This drone also comes with a built in camera.

One of the good things about this drone is the ability to make modifications. Also the price is quite good. For $180 you get the Hubsan X4 H107D and transmitter.

The transmitter is high quality and feels compact. It has a 4.3 inch color LCD screen. It has the usual flying sticks and mode button. It has also got a MicroSD card slot in case you wish to record videos. 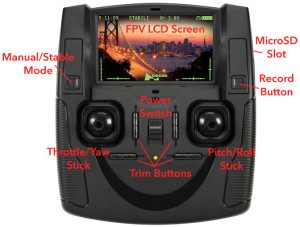 Honestly, the camera on the drone is nothing special. It’s a 0.3 megapixel camera with a 640 x 480 resolution. The image displayed on the LCD is 720 x 480. However the video is recorded at 720 x 240 for some reason. I have no idea why and the only solution is to convert it to a higher resolution later on a computer. The live video distance is around 100 meters which is quite good for such a camera.

The camera is good for flying live FPV. I wouldn’t use it for recording videos though. It just isn’t good enough for quality videos and if that’s what you are looking for then it ain’t for you.

You can see the quality of the video image below.

Making modifications to the drone is more for experienced users. For example you can add a better camera module which would make the video much better. The drone is too small for an external action camera so you can forget doing that.

Flying the thing is harder than flying a bigger drone such as a DJI Phanton 2. This is due to the fact that the Hubsan X4 H107D doesn’t have a GPS to hold the position in air. This also means that you can’t track the drone if it goes out of range. Nor does it have a fly home feature. That’s why you shouldn’t fly it too far from you.

Hubsan X4 H107D FPV is an excellent drone for beginners who wish to learn flying in FPV mode. It has a lot of spare parts so crashing isn’t that big of a deal.

But that’s all it’s good for. If you are more serious and want to shoot high quality videos then choose a bigger and more powerful drone.