Yuneec Typhoon Q500 4K is a drone that has been out for a while now and has gathered a lot of attention. This is why we have decided to review it despite it having a built-in camera just like the DJI Phantom 3 series. But this isn’t just a typical consumer drone with a camera. Instead it can shoot videos in 4K quality at 30fps and 1080p at 120fps while costing $1084. So now it is time so see if it is as good as it looks.

The Yuneec Typhoon Q500 4K is a big quadcopter. That is literally the best way to describing it. It has the dimensions of 420x420x240mm / 16.5×16.5×9.4″. And that is without the 13 inch propellers. It also weighs 1.7kg with both the camera and battery. To be fair I’m quite surprised it doesn’t weigh more. That is actually really good for a drone of that size.

Most of the drone is made out of plastic. It comes with a shiny gunmetal grey and black finish. The quality of the plastic is alright, it isn’t the weakest type but not also the strongest.

As I mentioned before, Yuneec Typhoon Q500 4K comes with a camera that is removable. Something that isn’t possible on the DJI Phantom 3 series drones. The removable camera is called CGO3 and it is attached to a gimbal. Just like the drone itself, the camera is big as well. Much bigger than on DJI phantom 3. But the gimbal has no issue with that and balances just as well.

Yuneec Typhoon Q500 4K comes with its own radio for controlling the quadcopter. It is called ST10+ remote control. And as you may guess, even that is big! ST10+ has the dimensions of 240x188x114mm / 9.5×7.4×4.5″. However it does have a 5.5″ Android LCD touchscreen built inside it. You can pretty much view all the necessary data you need on there. The only issue I have with the screen is that it is only 480p so the resolution could be better. The screen is also very bright so you have to use the sun shield during sunny days. 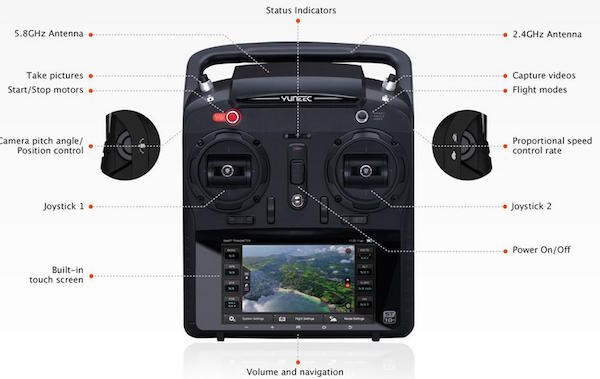 The ST10+ radio controller also has dual joysticks, a toggle switch for changing flight mode, a huge red button for stopping and starting motors. It has also got buttons for capturing images and videos and dual levelers to adjust the maximum throttle and tilt of the gimbal.

Being able to control the gimbal and camera from the remote is a must for all drones. One thing I did find annoying however was that the connection between gimbal and remote was a bit laggy. Like it took a little to respond.

You probably noticed that the Yuneec Typhoon Q500 4K also comes with a ProAction Steadygrip. That is basically a handheld mount that you can attach to the drones CGO3 gimbal camera. It is powered by 8 AA batteries and it should be able to live off that for 45 minutes. The handheld has a Mode button, a wheel for adjusting gimbals tilt and a power switch. So pretty simple. 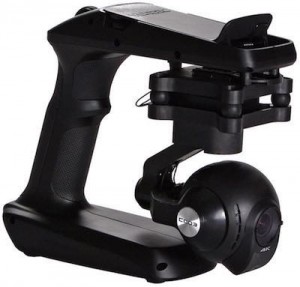 The ProAction Steadygrip has also got a place for a smartphone. There is a free CGO3 app for both iOS and Android. You can connect your smartphone to the CGO3 gimbal camera via WiFi. It provides live feed and you can also change settings through it.

Yuneec Typhoon Q500 4K connects with the ST10+ radio controller really quick. However it won’t take off until it has fully locked to all the GPS satellites. You can override this manually but I wouldn’t recommend flying without it. I don’t see a real reason to either to be honest, unless you wish to fly indoors. This is a big drone so it isn’t made for flying fast or doing anything crazy. If you do want to fly indoors then it is technically possible but again I wouldn’t advise it. It doesn’t have any positioning sensors that would keep the drone steady indoors. So pay that in mind as you might crash into anything really.

The quadcopter has 3 flying modes available: Smart, Angle and Home. The Smart mode is recommended for beginners. It makes the Q500 fly in the same direction that you push the control sticks to, regardless of which direction the drones front/nose is pointing to. It basically uses a Follow-Me feature that keeps the drones position relative to the radio controller. There is also a Watch-Me feature in the smart mode. It makes not only the drone follow you but the camera as well.

The Angle mode is for more experienced users as it makes the controls relative to which way your drone is pointing. This is actually the proper way to fly drones so I personally recommend to start with the Angle mode. Even if you are a beginner. Home mode makes the Yuneec Typhoon Q500 4K fly back to you.

The negative part about Yuneec is that you can’t set any pre-planned waypoints. This is something that DJI recently released for their Phantom 3 series and what I personally really like.

As I mentioned before flying the drone is easy and you can stream live feed to the LCD screen in your controller. The video is streamed over 5.2Ghz band and the drone operates on 2.4Ghz. This means that if your drone gets too far then the video will stop transmitting before your controller does. You can tell if it has gone too far by looking at the live feed. If you suddenly start losing connection then it might be best to turn back. I managed to fly 270m / 900ft in a crowded area before losing connection. In a rural area I managed to get 365m / 1200ft.

Yuneec Typhoon Q500 4K is pretty stable. I mean it does have its moments when it wobbles in the air, mostly during stronger winds. But the gimbal works perfectly and keeps the video completely stable. The drone is also crazy quiet.

I managed to fly the quadcopter for around 22 minutes on a single battery charge. It takes around 2 hours to fully charge an empty battery.

Yuneec Typhoon Q500 4K camera has a really good lens. It doesn’t create a fisheye distortion that you get with GoPro action cameras. The lens actually captures so much that if you are moving forward at top speed then it will also capture the propellers at the top.

The cameras max resolution is 4K and it can be shot at 30, 25 or 24fps. Now 4K video quality is pretty much the best you can get at the moment on consumer drones. On the Q500 the 4K video is beautiful. It has a lot of detail and sharpness. But the quality also largely depends on how good you are with settings.

For example, by default the camera is set to Automatic mode. Which means is that it keeps changing white balance and exposure based on conditions. Even when I flew around the same location, colours would kind of shift every time. That is best seen if you take a video. You can’t really trust the live feed on the LCD screen as the colours and video quality on that isn’t 1o0% accurate.

Luckily there is a Pro mode. Enabling that lets you manually configure white balance and also capture Raw images in DNG format. Autoexposure I would say works pretty well. You can change it on LCD screen if you wish to.

One annoying thing about the footage is that the sides are a bit blurry. Like the quality is amazing at the center of footage. I would even say better than on the DJI Phantom 3 Professional. But as you move away from the center you start to gradually see less detail. Might be that they have gone with a way too wide angle lens.

The Yuneec Typhoon Q500 4K is a good looking drone. I really like what you get for the price. The camera gimbal set is removable and can be attached to a handheld gimbal that comes with the drone. If you want to then you can even attach a GoPro to it. The radio controller has a built in Android LCD screen. And most of all the camera and gimbal are amazing. Even though the drone itself isn’t as stable in air as DJI Phantom 3, you won’t notice that in any video as the gimbal works just perfect.

Only drawbacks are the size and lack of features. Like it is far too big to fit in a backpack so if you are planning to take go hiking with it then it probably won’t work. Also its competitors already have way-point planning so it is a shame that is not possible with Yunteec. But if you mostly travel by car and don’t want way-point planning anyways then this is probably the best bang for buck drone with 4K camera at the moment.

An amazing drone with a removable 4K camera made by a company called Yuneec. Comes with plenty of accessories such as a handheld for the camera and aluminium case.

Related Articles
We will be happy to see your thoughts